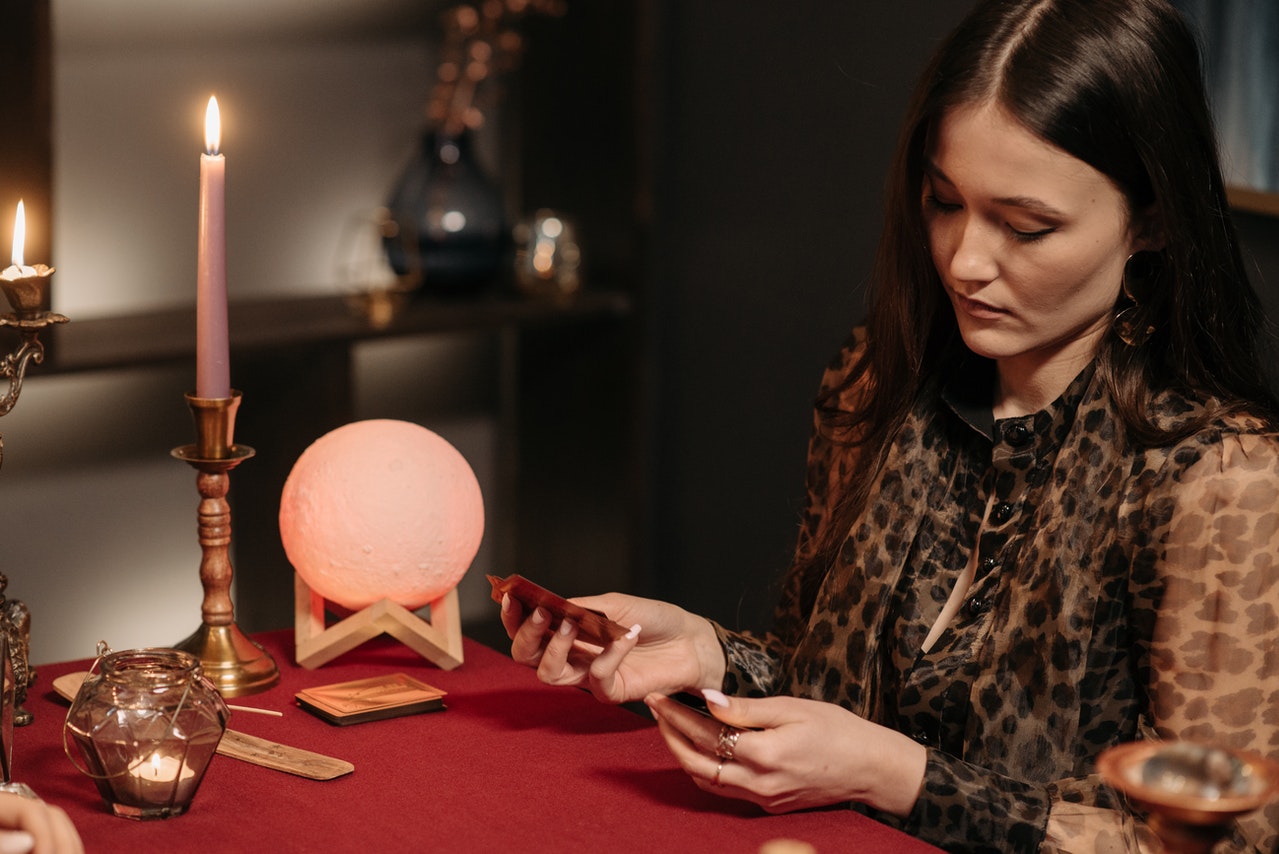 Tarot is any deck of cards used in tarot games and fortune-telling, which is known as a tarot.

Tarot decks were created in Italy in the 1430s by adding a fifth suit of 21 specially designed cards called trionfi ("triumphs") and an odd card named il matto ("the fool") to the previous four-suited pack.

The contemporary joker, which was developed in the late 19th century as an unsuited jack in the game of euchre, is not related to the fool.

The pack to which these Tarot Cards were introduced had Italian suit marks and related to a period of card design experimentation when queens were frequently added to the sequence of court cards that previously only included a king and two masculine figures.

The four figures were reduced to three again in standard cards (but not in tarots) by the suppression of the queen, except in French cards, which suppressed the cavalier (knight).

Instead of a shared suit mark, the trionfi each had their allegorical artwork.

Characters in medieval reenactments of Roman triumphal processions, comparable to floats in a modern festival parade, are likely portrayed in such images.

They were initially unnumbered, so remembering which sequence they went in was required.

Whether or not trionfi were created independently of regular playing cards, their role was to operate as a superior suit to the other four - a suit of triumphs, or "trumps" - when they were introduced to the pack.

The origins of playing cards are uncertain, but they first appeared in Europe in the late 14th century.

The first records originate from 1367 in Berne, and they appear to have spread quickly throughout Europe, as seen by the records, which mostly document the banning of card games.

The only significant information about the appearance and number of these cards comes from a text by John of Rheinfelden from Freiburg im Breisgau in 1377, who, among other things, describes the basic pack as containing the still-current 4 suits of 13 cards, with the courts usually being the King, Ober, and Unter ("marshals"), although Dames and Queens were already known by then.

The suits of Batons or Clubs, coins, swords, and cups were one of the first patterns of playing cards to emerge.

These suits are still used in traditional Italian, Spanish, and Portuguese playing card decks, but they've also been modified for tarot divination decks, which first debuted in the late 1800s.

Between 1440 and 1450, extra trump cards with allegorical pictures were added to the typical four-suit pack in Milan, Ferrara, Florence, and Bologna, resulting in the first known tarot packs.

These new decks were dubbed carte da trionfi, or victory cards, and trionfi, which became "trumps" in English, for the additional cards. In Florence, Minchiate, an enlarged deck, was used.

The astrological symbols and the four elements, as well as typical tarot themes, are included in this 97-card deck.

Despite a lecture in the 15th century by a Dominican priest condemning the immorality inherent in cards (mostly due to their usage in gambling), no systematic condemnations of tarot were documented during its early existence.

The number of decks produced is assumed to be modest because the first tarot cards were hand-painted.

The mass production of cards became possible only with the development of the printing press.

During the Italian Wars, tarot spread beyond Italy, first to France and then to Switzerland. 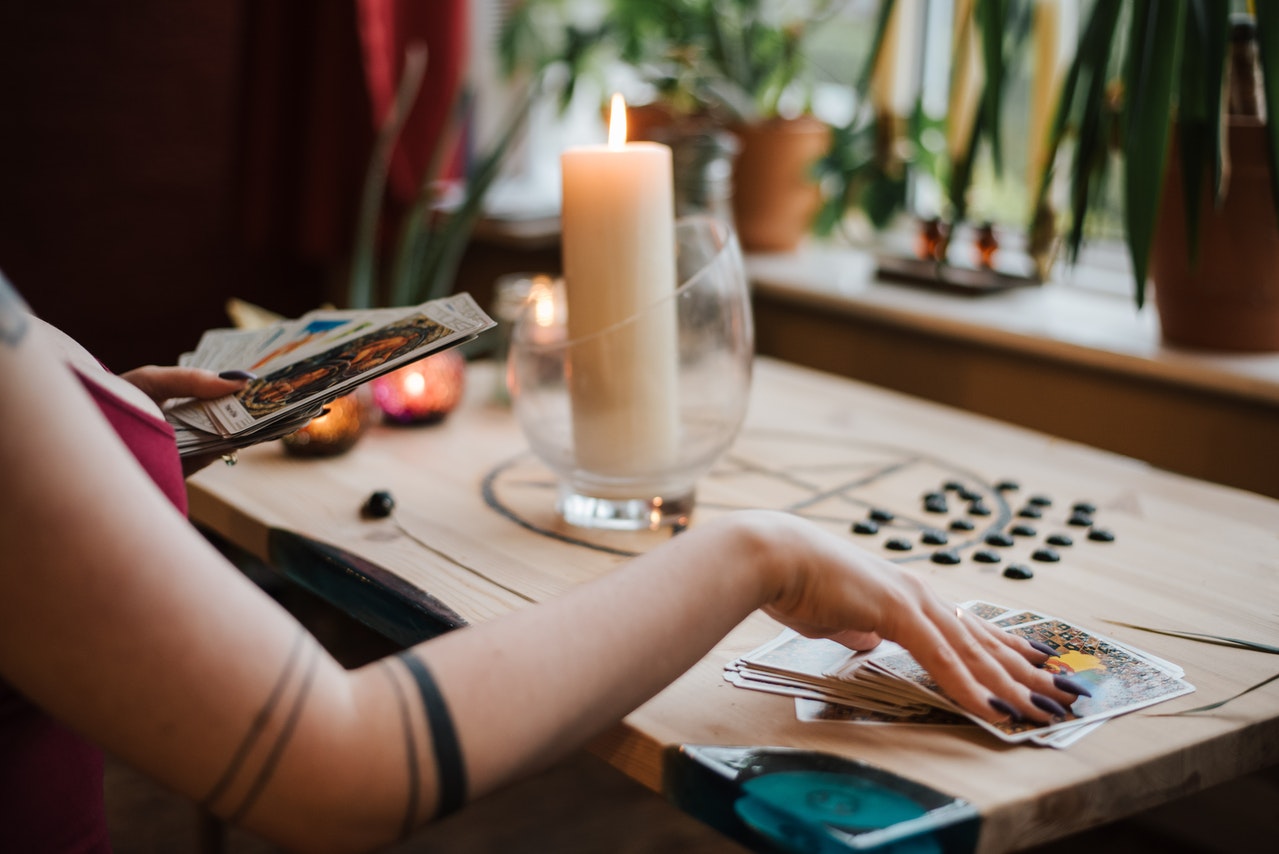 The Major Arcana are the trump cards of a tarot deck in esoteric activities. In a regular 78-card pack, there are generally 22 of these cards.

Typically, they are numbered from 0 to 21.

The trumps were merely part of a unique card deck used for gaming and gambling before the 17th century.

The Trumps may have had metaphorical and cultural significance, but they had no mystical or magical significance when they were first created.

These cards function as permanent trumps in card games (Tarot card games) and are distinguished from the remaining cards, the suit cards, which are known to occultists as the Minor Arcana.

The words "major" and "minor" were coined by Jean-Baptiste Pitois (1811–1877), who wrote under the pen name Paul Christian, and are employed in esoteric and divinatory uses of the deck as well as in practicing Esoteric Tarot.

According to Michael Dummett, the Major Arcana originated in aristocratic ideology in the Italian courts of the 15th century when it was formed, and had a simple allegorical or esoteric meaning.

From then on, the building of the tarot's esoteric and divinatory significance, as well as the Major and Minor Arcana, progressed.

The Major Arcana was developed by the Marquis Stanislas de Guaita as an initiatory process for spiritual ascent and progress.

Sallie Nichols, a Jungian psychologist, described the tarot as having profound psychological and archetypal importance in 1980, even embedding the whole Jungian individuation process into the tarot cards.

The suit cards in a tarot deck are known as the Minor Arcana, or Lesser Arcana. Pip cards numbered one (ace) to ten, as well as court cards (or face cards) in each of the four suits, initially appeared in tarot card games.

The Minor Arcana are frequently drawn in modern tarot cards, a practice pioneered by the Rider–Waite–Smith tarot deck in 1910.

The Minor Arcana cards, when used in conjunction with the Major Arcana in a tarot card reading, offer nuances and intricacies, as well as day-to-day insights.

Tarot variations derived from Italian and Spanish decks (coins, disks, or rings) include cups (chalices, goblets, or vessels), swords, and pentacles as the four suits in the Minor Arcana of Tarot variations.

The four court cards are page, knight, queen, and king. In some variations, princess and prince cards replace the page and knight cards, and the historic Visconti-Sforza tarot deck adds two more cards to the court: the damsel and the mounted lady.

While the original Marseilles Tarot had 56 cards, subsequent decks based on the French suits of clubs, hearts, spades, and diamonds have just three face cards per suit, with a jack (or knave) in addition to the queen and king.

The classic tarot deck, which is based on the RWS method, has 78 cards divided into two categories:

The Major Arcana cards frequently symbolize the main archetypal issues that are shaping your life and your soul's path to enlightenment, adds Wille.

By contrast, the Minor Arcana cards mirror everyday happenings and can provide greater context and depth than the Major Arcana cards.

The Minor Arcana is split into four suits: wands, pentacles, cups, and swords.

The Major Arcana cards are numbered 0 to 21, while the Minor Arcana is divided into four suits: wands, pentacles, cups, and swords.

The cards range from 2 to 10, starting with the Ace and ending with four court cards: Page, Knight, Queen, and King.

Each suite has a governing element - water, earth, air, or fire - that corresponds to different aspects of life.

When dealing with the Minor Arcana cards, it's critical to examine these components and places, since they make intuitive readings much simpler.

Of course, with a little practice!

What Do Tarot Cards Represent?

What do tarot cards symbolize in general? Tarot cards are used to provide direction and "medicine" for what is going on in your circles, such as love, money, job, aspirations, and overall life path.

What Religion Do Tarot Cards Come From?

Some people who use tarot for cartomancy believe the cards have esoteric connections to ancient Egypt, Iran, the Kabbalah, Indian Tantra, or the I Ching, even though scholarly research has shown that tarot cards were invented in northern Italy in the 15th century and that there is no historical evidence of their use.

Is It Good To Read Tarot Cards?

Tarot readings assist a person in learning the information required to make sense of a certain circumstance.

As readings provide a person with insight into past, present, and future occurrences based on their current path at the time of the reading, decks are best utilized as a tool of inner wisdom and guidance.

What Are The Four Types Of Tarot Cards?

The 56 cards of the minor arcana are divided into four suits of 14 cards each. The suits, which are comparable to those of modern playing cards, are as follows: wands, batons, or rods (clubs); cups (hearts); swords (spades); and coins, pentacles, or disks (diamonds).

Can You Ask Tarot Cards About A Specific Person?

Easy… use the the words “Me” and “I”… but avoid using he/she, him/her or the other person name if you can help it. Ask things like “what can I do to make my relationship with ______ better” or “What can I do to heal my broken heart?” “How can I find the right person for me?”…things like that.

What Can You Not Do With Tarot Cards?

How Do You Ask For Love In Tarot?

While tarot cards can't exactly tell you what will happen in the future, they can help you make better-informed judgments and consider your options in a new light.

Tarot cards can assist you in understanding and dealing with life's changes.

They can also be used as a tool for self-exploration, transformation, and personal growth.