Sanpaku Eyes - A Window Into Your Soul Or Into Your Future?

You've probably heard the old adage that goes something like, "eyes are windows to the soul" several times by now. According to this adage, one can learn a lot about a person by looking into their eyes.

But if you have a condition called "sanpaku eyes," it opens a new window into your future! Intrigue? Let's dig into this.

The colored iris of a human eye is typically located in the middle of the eye. It is protected by the upper and lower eyelids, with no scleral showing at the top or bottom.

On the other hand, seeing the sclera outside of the iris, on the other hand, is taken as an indication of profound neurological instability and a disruption in the normal rhythms between the brain, the body, and the soul.

In Oriental medicine, "Sanpaku eyes" can represent a variety of disharmonies in the mind and body. In general, there are two distinct kinds of sanpaku.

Superstition in Japan holds that people who have either of these conditions are more likely to be involved in accidents and have a propensity toward engaging in violent behavior. These are Yang Sanpaku (Sanpaku Above) and Yin Sanpaku (Sanpaku Below). The picture section shows the distinction between the two types of sanpaku. 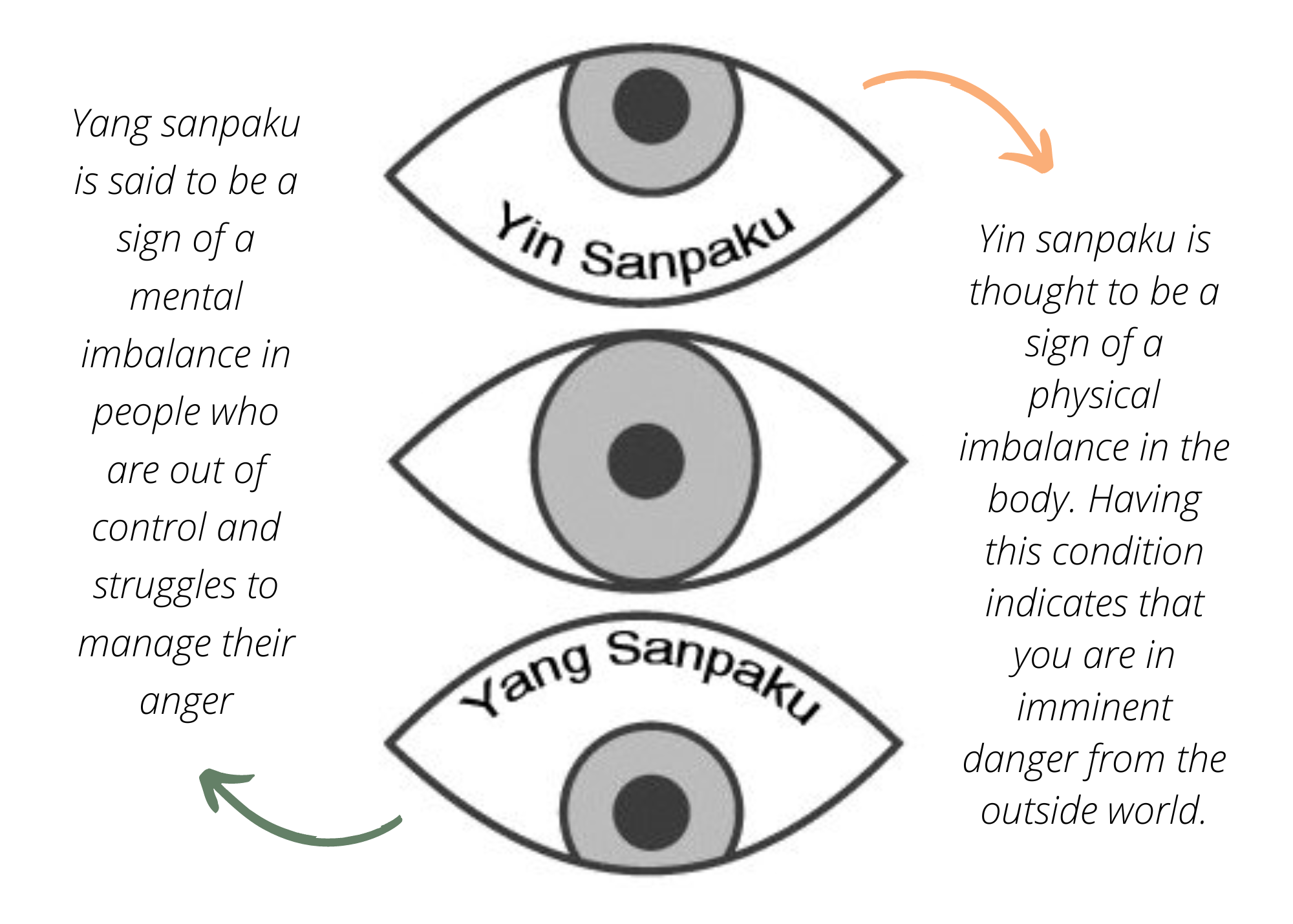 From top to bottom: Yin Sanpaku, Normal eye, and Yang Sanpaku with their respective characteristics

These are the eyes of a sanpaku, in which the white of the eye can be seen above the iris. Yang sanpaku is said to be a sign of a mental imbalance in people who are out of control and struggle to manage their anger, like psychopathic people, murderers, or serial killers.

If you understand and believe in this superstition, and if you can see the whites of your eyes, you might try to take a few deep breaths and calm down a bit. According to this matter, it's said that you're in danger from your own emotions, which make you do terrible things.

Charles Manson is a good example of how this works in this case. This American murderer became famous for killing people and starting a group called the "Manson Family." Under his direction, his followers also killed people.

These are sanpaku eyes where you can see the sclera beneath the iris. Yin sanpaku is thought to be a sign of a physical imbalance in the body. It is said to be present in people who abuse drugs, drink too much, and eat a lot of sugary foods and grains.

So, those of you who can see white below your iris, then you need to be on guard because the world is trying to get you. People tend to think that if you have this condition, you are in immediate danger from the outside world.

You don't trust this belief? Just look at some examples from a selected group of famous people who have these kinds of eyes, then ask yourself after.

Twilight star Robert Pattinson has white beneath his irises and was recently dumped by his co-star Kristen Stewart. John F. Kennedy had sanpaku at the bottom of his eyes as well. As you may know, the American politician who served as the 35th President of the United States beginning in 1961 was assassinated near the end of his third year in office.

Famous individuals who exhibited this trait apart from JFK include James Dean, John Lennon, Princess Diana, and Abraham Lincoln. John Lennon, who was killed by a fan, wrote a song called "Aisumasen" about the Sanpaku eye.

George Ohsawa, a Japanese author, is credited with introducing this concept to the West. Ohsawa developed the macrobiotic diet because he believed it could treat sanpaku. Tofugu says that people have been confused by the theory since the 1960s, even though it is better known in the West than in Japan.

Originally a method of assessing a person's character through observation of their face, sanpaku can now be used to determine whether or not a person poses a threat to others. A person with sanpaku is also out of balance on all levels of their being (biological, psychological, and spiritual).

As Ohsawa put it, it is a warning, a sign from nature that one's life is threatened by an early and tragic end. Ohsawa claimed he knew in advance that JFK and Marilyn Monroe would both pass away in the early 1960s. Both famous figures possessed "yin sanpaku," and they met untimely ends.

"Is the curse of Sanpaku’s eyes real" ask by a Quora user. The following are their answers:

On the other hand, another user posted some of the common mental problems that people with sanpaku eyes tend to have:

"Probably not so good relationship with friends and family. you willing to do anything to achieve your goal. Yeah, in order to get sanpuka eyes, you need to have many of the above. I, myself have yin sanpuka eyes."

Lastly, a user who identified herself as Lasting Love commented:

"They've always been like that. I've also lived a life of great misfortune and suffer from multiple illnesses, which is interesting, given that these things are often associated with having sanpaku eyes. It's also said that people with sanpaku eyes die young — I'm 24, so who knows how long I've got left! I don't necessarily believe in the mythology, but it's a funny coincidence. I like my eyes!"

How To Get Rid Of Sanpaku Eyes

Nowadays, it is widely assumed that sanpaku eyes are caused by a downward pull or drooping of the eye muscles. Individuals with round faces and thin skin are more likely to develop this condition. There are numerous natural remedies and surgical treatments available to reduce this unusual appearance and achieve a more balanced one.

The QOVES website suggests some of the most common ways to minimize the appearance of sanpaku eyes:

Some of the most common ways to minimize the appearance of sanpaku eyes are: A healthy diet and hydration, Adequate sleep, Regular exercise, Balanced body weight, Eyesight exercises, Routine eye care, and Avoid dark eyeshadows.

DO YOU HAVE THESE EYES?.. WATCH THIS! Scariest Japanese Theory

How Do I Know If I Have Sanpaku Eyes?

Sanpaku occurs when the white of someone's eye can be seen above or below the iris. Normally, that would be a fairly unremarkable occurrence that you might not even notice. However, according to one Japanese folktale, sanpaku may be a good predictor of your fate.

There are many urban legends surrounding San Paku's eyes, but none of them are true in any way. If a person is under a great deal of stress, they may develop dark circles under their eyes. This can give the impression that they are tired or unhealthy.

This trait may exist in either or both of the person's eyes. It seems to be a perfectly normal trait, but the Japanese people have a lot of superstition surrounding Sanpaku's eye. This includes the belief that having eyes like that can influence a person's destiny.

To practitioners of traditional Japanese medicine, this also points to a discrepancy between the body and the mind. However, whoever possesses the Sanpaku eyes may find that they undergo significant changes in their character and behavior.

Many people experience both good and bad fortune every day, regardless of the appearance of their eyes, so this superstition joins the ranks of others that lack any real basis in science.

The macrobiotics who recommended this diet may have implied that its adherents would be less likely to suffer an accidental injury. However, while eating well improves our health, it cannot guarantee us safe from all dangers.

The country of origin, Japan, no longer even takes this superstition seriously. In Japan, this trait is the same as being cute, so people who have it are instantly popular.

To answer the question: Can you see into your soul or your future through your eyes? You decide, but the truth is that no one can know what will happen to anyone else unless they try to get that power and ability from bad spirits.