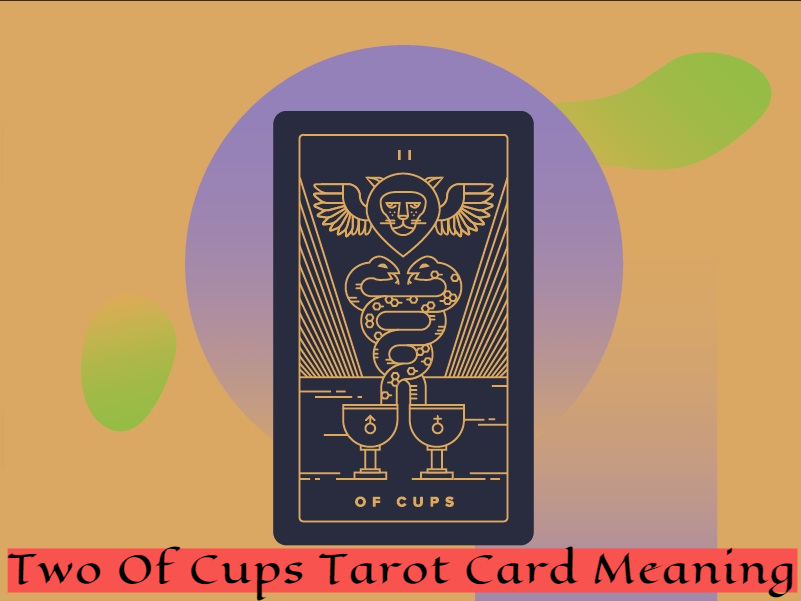 The two of cups tarot card meaning is universally adored by everyone. After all, we are dealing with the love card here. But there is a great deal more to it than just romantic love.

When it comes to dealing with any relationship pairing or partnership, this is a very good card to have.

The two of cups tarot card meaning gives a strong indication of romantic feelings, including desire and love.

It can refer to strong commercial collaboration, friendship, or other relationships between two people in circumstances when the romantic attraction is not the primary emphasis.

Traditional decks that are based on the Rider-Waite-Smith design depict the Two of Cups as a man and a woman, each of whom is holding a cup, reaching out to one another.

A winged lion floats above them in the heavens, serving as a guardian and blessing them for their love.

When you are attempting to construct a shared understanding of the situation or when you are working toward a common objective, this is a very useful card.

This is in no way a circumstance that can be described as a "friends with benefits" relationship or a "casual, fun, and sexy moments" partnership.

The two of cups tarot card meaning represents a connection that is getting stronger and more stable.

In general, if the Two of Cups Tarot card shows up, you should be having a good time and have a very peaceful existence.

The two of cups tarot card meaning is perfect. While it often connotes harmony, mutual respect, and admiration in romantic relationships, it may also refer to these things in friendships and business partnerships.

When this Minor Arcana card emerges in your tarot spread, it may also represent fairness and balance.

Since this is an attraction card, you can discover that you are well-liked or in high demand throughout your life!

The two of cups tarot card meaning is a fantastic card to receive in a love tarot reading!

If you're single, it denotes a budding romance or the offer of a partnership with someone you'll have a deep connection with and who will find appeal in you both.

It may also suggest a meeting with an old acquaintance. The Two of Cups denotes a great partnership, marriage proposals, engagements, and weddings if you are in a committed relationship.

It's a good omen since it shows that you two are quite content and that your relationship is harmonic, loving, balanced, and supportive of one another.

When this card comes, you should soon find yourself making the next step in your commitment to your spouse or developing a deeper degree of closeness.

The two of cups tarot card meaning is a sign that the connection it refers to might be with your soulmate, even if it is less passionate than comparable cards in the Major Arcana.

The Two of Cups might signify a solid and prosperous commercial collaboration in a work environment.

If you are contemplating forming a business partnership with someone, seeing this card is a sign that you and your partner will get along well, have similar objectives, and have respect for one another.

The Two of Cups is still a favorable omen even if you are not in a partnership or considering one, since it denotes harmony and balance at work.

You should observe that things are moving smoothly and that you have good working relationships with your coworkers.

Currently, everything should be in harmony financially. Even if you don't have a lot of money, you will have enough to pay your payments and not worry.

If you have been experiencing health issues, the Two of Cups is a bright omen, suggesting that everything should be returning to normal very soon.

Look to the accompanying cards to confirm if you are expecting twins if the Two of Cups appears in your pregnancy.

The cosmos will be sending you love and wonderful energy, and you will be highly receptive to it.

The Two of the Cups in reverse might indicate that the previously existing equilibrium has been upset.

The maintenance of this equilibrium was crucial to the group's cohesiveness; its disruption would lead to alienation and strife.

When two forces' negative energy is present, rather than uniting or becoming closer to one another, they appear to reject one another.

One side may be harboring resentments if you see that some minor elements that weren't issued previously are now becoming an issue.

A channel of contact between you and the other party that allowed you to discuss disputes freely has been severed, which has only made the cycle of anger and imbalance worse.

Be the first to approach, and you could discover that fixing the issue is much simpler than you anticipated.

When the reversed Two of Cups card appears in a love tarot reading, something isn't quite right.

The two of you may be becoming too dependent on one another, are unable to cultivate each other's special abilities, or that unequal power dynamics are upsetting the equilibrium between the two partners.

Always remember to value both your partner's and your uniqueness if you're in a committed relationship.

You two are unique individuals with unique demands and interests. Being you rather than being a carbon copy of your spouse will add more to the connection.

This card occasionally also represents the pursuit of love at any cost.

In a business relationship, you may be dealing with conflicting interests, disrespect, or other issues.

This should serve as a cautionary tale if you are considering forming a partnership but do not currently have one.

The other person could not regard you or agree with your objectives. Those with whom you work may be aggressive right now if you are not in or seeking to establish a commercial relationship.

If you are a leader, you may encounter insubordination, or overall tension and chilly behavior from your coworkers.

The two of cups in reverse is not a particularly good card for the money. It suggests instead that you might not have the equilibrium you believed you had there.

To find out whether there is a problem, try tracking your expenditure more closely. Although the score isn't entirely favorable, it is also not very bad.

The process of comparing your income to your expenses is simple enough. You might need to look at the data more carefully and make some modifications as a result.

Now is a good moment to assess how well you are sticking to your spending plan and to see if anything is missing.

Below is a short summary of the key terms associated with this Minor Arcana card before we delve more into the upright-and inverted Two of Cups tarot card meaning and its relationship to love, profession, and life.

The Two Of Cups Card And Tarot Numerology

In kabbalistic thought, the masculine component of divinity and the sphere of the zodiac are connected to the number two, which represents duality.

The number two is associated with the moon in traditional numerology.

The suit of cups emphasizes the significance of maintaining equilibrium when working with strong currents of the subconscious, as represented by the Suit of Cups.

Two Of Cups A Beautiful Exchange

This is what it looks like to be generous while also exposing oneself to risk.

This is the sensation you get when you crack your chest open and offer the contents of your heart to another person. It is to share a part of oneself while also being open to receiving.

The Two of Cups card represents a transaction. You give someone or something the contents of your cup, which is a container for all the love, sadness, and mystery that are contained in your heart.

Even though falling in love is not the only way to read this card, using it as a metaphor for what it wants to convey is effective.

It takes bravery to allow oneself to fall in love, and much more courage to utter the words “I love you.”

How often do we keep what we are truly feeling to ourselves out of fear of being laughed at, rejected, or just not fitting in with others?

How regularly do we repress what we feel because we are unwilling to embrace what we want for ourselves?

The Two of Cups is the card that represents the opposite. Perhaps you are experiencing fear while still attempting to reach out to others.

These are the first few steps into a new relationship founded on love and trust, and while they are tentative, they are also brave.

This card might be indicating something about your connection with a partner if you already have one.

If you have several partners, this speaks volumes about the nature of your connection with a certain individual.

The number two is significant in this context because it refers to a conversation that takes place between two individuals.

It is the love or friendship that we share with another person that paves the way for us to be completely honest and at ease in their company.

However, this does not have to be about another person similar connections can also exist between you and other things, such as a routine, a position, or a location.

The Ace illuminated for us the possibility of your embarking on a new spiritual journey, one in which you would learn to pay attention to your heart and act on the inclinations it expresses.

The Two demonstrate to us what it is like to seize an opportunity and make the initial moves in the right direction.

You may be starting to develop feelings for yourself. You may be beginning a new spiritual practice that requires you to expose yourself as vulnerable and give something up in exchange.

Love and trust may be the foundation for whatever sort of commitment you want to make.

However, this does not have to be about another person; similar connections can also exist between you and other things, such as a routine, a position, or a location.

The Ace illuminated for us the possibility of your embarking on a new spiritual journey, one in which you would learn to pay attention to your heart and act in accordance with the inclinations it expresses.

Is The Two Of Cups A Yes Or No Card?

If you asked using a yes or no tarot reading, you would have gotten the response yes.

What Is The Meaning Of Two Of Cups?

What Does Two Of Cups Indicate?

The Two of Cups indicates that if you have questioned your Tarot cards about someone's sentiments toward you, they are shared.

This card emphasizes the need for trust in every situation so that it can occur. Be frightened. Be sincere. Describe yourself.

Be kind to yourself emotionally and keep in mind that the universe will reward you for your good deeds and will give you what you are willing to give in return.

With the knowledge that this is a great transaction, freely give of yourself.