The Tower Tarot Card meaning has a love/hate relationship with many Tarot readers. While The Tower card has many different interpretations, one consistent message that emerges is one of change.

It is, along with the Devil and Death cards, one of the most feared cards in the tarot deck, especially when it appears in the future position. However, the Tower, like all 78 cards, has both positive and negative aspects.

If you pulled the Tower during a reading, you might be wondering if you're going to lose. It very well could be, given that one of its meanings is release and tragedy, but the possibility of a fresh start is just as likely.

Continue reading to learn more about this Tower Tarot Major Arcana card and what its appearance may mean for you.

The key to understanding tarot cards is frequently found in what is depicted on the card itself. The Tower tarot card is no exception.

The Tower card in the Tarot represents the demise of old ideas. A structure has suddenly and violently collapsed, causing chaos and distress, but it has also cleared the way for something new to be built.

This card's basic symbols are a tower on a rocky outcrop, a bolt of lightning, two figures falling from the tower, and waves crashing below.

"Nothing lasts forever," is a difficult lesson to learn. The Tower teaches us that nothing is ever truly stable. And if you've drawn this card, it indicates that your life has already experienced or will soon experience upheaval.

But don't be afraid. If you feel like your life is falling apart, it's because you may have invested your energy in activities that weren't truly worthwhile.

Take this card as both a warning and a gift if it appears in your reading. Strong change is on the way, but if you prepare for it and learn from its devastation, you'll be truer to yourself in the future.

In this card, lightning strikes the Tower, which is made of rocks and foliage, jolting the rocks and causing the Tower to fall to the ground.

The shock of its impact represents the unintentional destruction that this card brings into our lives. The crow is an ominous sign.

However, at the Tower's base, we can see blooming mushrooms and plants. This is to imply that after the Tower falls, a new beginning is possible.

When The Tower card appears in a Tarot reading, be prepared for the unexpected: major changes, chaos, destruction, and upheaval.

The Tower is the card that people usually prepare themselves for because Death is the one that they are most afraid of. The Tower Tarot card depicts chaos and destruction.

This Major Arcana represents upheaval and sudden change. This transition is unavoidably frightening, life-changing, and difficult. When you encounter a negative Tower, you may feel as if a bomb is about to detonate.

Regardless of the challenges you face, you will succeed, and you will later recognize that, while the experience was traumatic and harrowing, it shaped you into the person you are today.

In one sense, The Tower is beneficial because its damage is primarily directed at tarnished foundations, unrealistic hopes, and unrealistic dreams. Although The Tower causes destruction, it can also result in rebirth and development.

Tarot love meanings for the Tower indicate a sea change. A relationship built on shaky or crumbling ground is doomed to fail quickly.

The initial pain creates an opening for new opportunities. You may have taken pride in being a good parent or partner, which compelled you to stay in a relationship even if you were unhappy. Recognize that these difficult times will pass.

The Tower card's best feature is that it allows you to break free from old patterns of thought that have been holding you back.

The Tower Reversed means that you are going through a big change and upheaval in your life. This is different from what happens in The Tower Upright, where change is often caused by things outside of you and may even feel like it’s being forced on you.

Instead, when you play The Tower Reversed, you start the change and question your most important beliefs, values, goals, and meanings. As you find a new spiritual path, you may have a spiritual awakening.

You might change what you think and believe about important things and realize that you can’t support older models anymore. Or, in more serious cases, you might have an existential crisis in which you really start to wonder what your life is all about.

Even though this can be a scary time, trust the process and know that everything is working out for the best. You are making change and transformation happen so that you can step into a new and better version of yourself.

The Tower Reversed can sometimes mean that you are resisting change and putting off the destruction and upheaval that you need to go through.

You might not want to believe that things are changing. Or you might be holding on to old beliefs even though you know they aren’t useful or good for you anymore.

You have to go through this hard time, even though you don’t want to, in order to learn a valuable lesson and move forward in your life. And know that if you keep fighting this change, it will keep coming into your life more and more.

The Tower card brings about growth and change that can’t be stopped. It won’t go away no matter how much you try to hide or deny it, and it will only get louder as things could get worse.

Pay attention to your intuition, the Tower can make the change coming into your life less of a shock. You might know ahead of time or have a gut feeling that something big is about to happen, and you can make plans to avoid the destruction that is coming.

The Tower Card Meaning In Love And Relationships 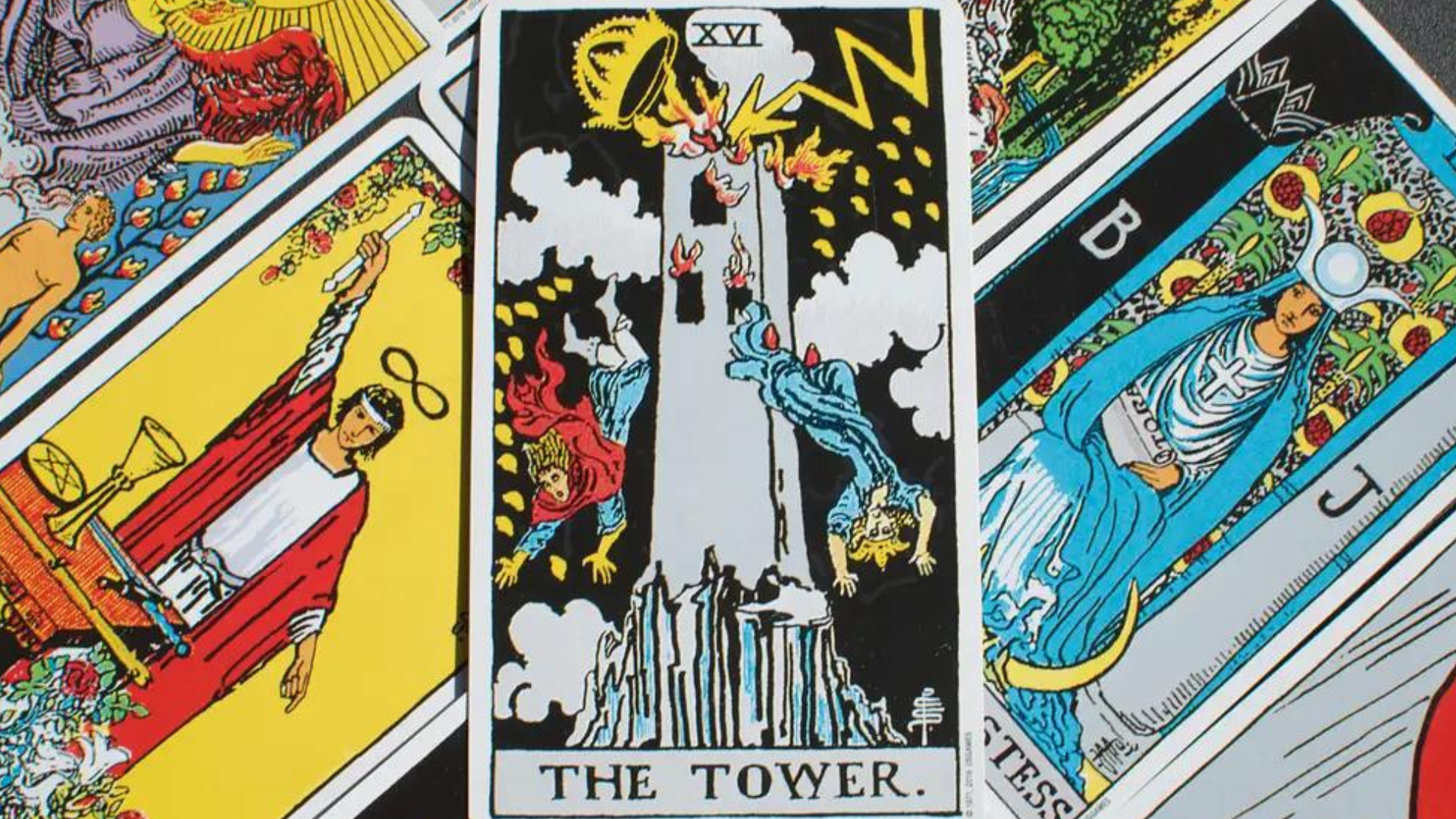 Different tarot cards with The Tower Card in the middle

When it pops up in a love Tarot reading, The Tower can represent two things; the end of your relationship or the death of your partner.

There’s also a possibility that your partner will spend time in jail, but this is not as likely as death or divorce. Obviously, The Tower marks the conclusion of an important relationship. This ending will be unexpected and painful.

The Tower predicts that you won’t be the one to walk away, instead, your partner will leave you without giving a reason. One day, they’ll be here, the next, they’ll be gone.

The Tower can symbolize the untimely death of your partner. This will not happen after a long, drawn-out illness; it will be something that takes you by surprise.

If your partner doesn’t die, The Tower can represent the death of someone close to you both, usually another relative.

Unfortunately, The Tower means that your ex will not be back or if they do return, the reunion will be short-lived. Either way, this relationship has no future.

The Tower Card Meaning In Career

The Tower often brings a shake-up to career readings. This card can be a big red flag for both a potential job or your current one.

For example, it could indicate that there have been underhanded dealings that are about to come to light, with serious ramifications for everyone involved.

It can suggest that a business or organization is on fundamentally shaky ground. Expect to restructure, if not outright collapse. This could be a positive indicator of bad management or leaders getting ousted.

But just to be clear, even if your workplace cleans out all the jerks, there will still be a period of dealing with the chaos.

For example, your toxic coworker may get fired, but you’re temporarily burdened with part of their job responsibilities. On the plus side, this too will resolve itself.

This card can appear when new information has come to light that forces you to dramatically switch your priorities. An example could be reducing your working hours to care for a sick family member.

Sometimes a sudden change in your family or friendship circle puts things into a new perspective that challenges you to reconsider how you spend the majority of your day.

What Does The Tower Card Mean In Love?

The Tower tarot love meaning signals great fundamental changes. Relationships that have weak or crumbling foundations won't last much longer and may collapse. While initially painful, these clear the way for new experiences.

What Does The Tower Card Mean In Health?

The Tower card represents illness and disease in terms of wellness. If you see a Tower card in your health reading, it could indicate an unexpected illness, miscarriage, or a long bout of depression.

What Does The Tower Card Represent In A Reading?

The scene of the tower being struck by lightning and on fire, with people jumping out the windows, depicts chaos and damage. Lightning represents a burst of energy and insight that results in a breakthrough or revelation.

The Tower Tarot Card meaning represents change. Whether it's a change in relationships, yourself, or your career, this card will provide plenty of food for thought if it appears during your online tarot reading.

Even though the outcome appears to be disastrous, there is a sense of victory and triumph in the end. The Tower tarot card depicts how, as the Golden Crown falls from the top of the Tower, so does your Ego during this time of adversity.