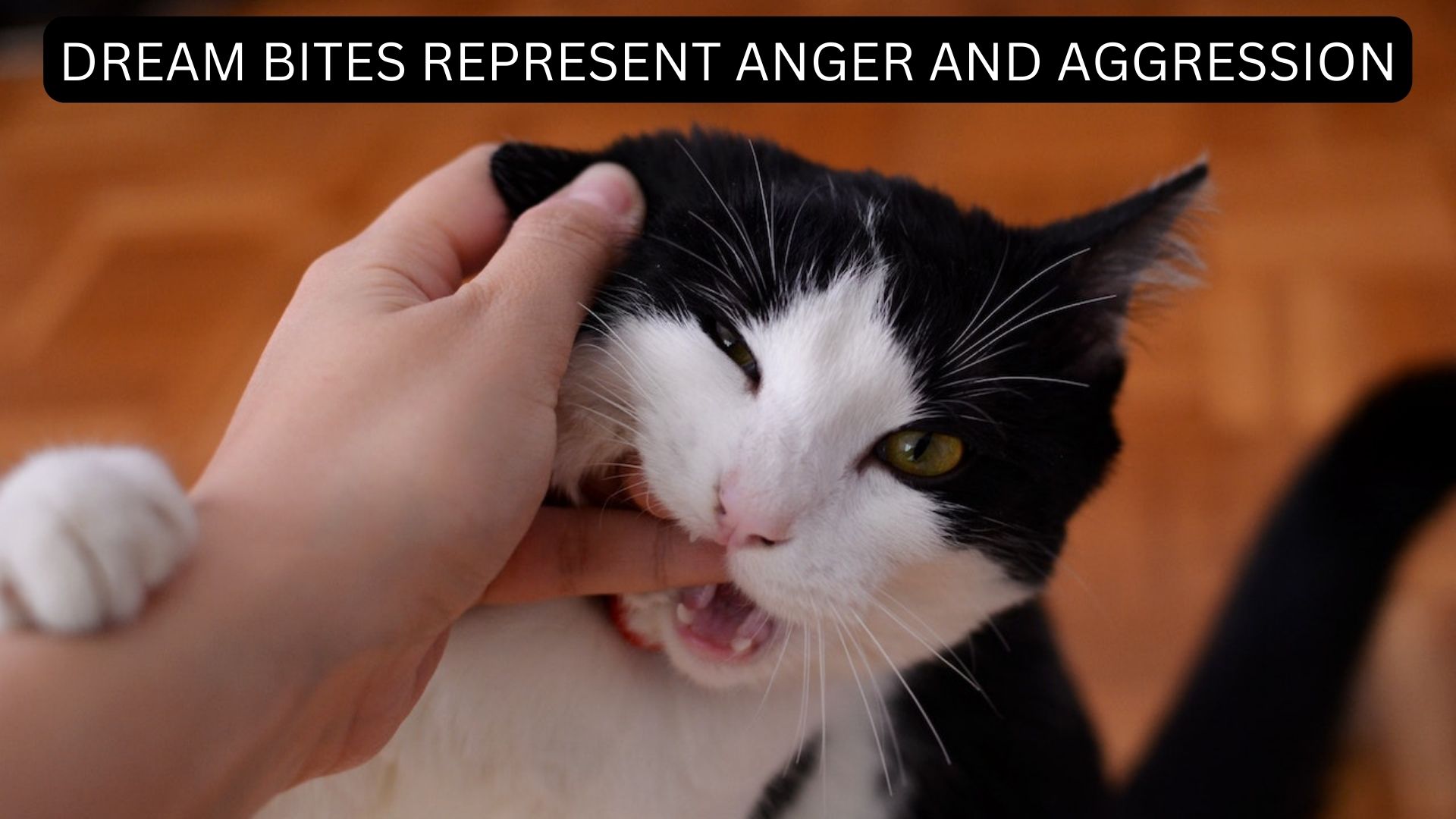 Dream bites in which a person is bitten by an animal whether it be a dog, a spider, a shark, or even a snake serve as a warning about anger, aggression, or an assault that is carried out unconsciously.

These highly symbolic but enigmatic dreams are filled with hints that can assist the dreamer in determining if this menacing strike originates from the dreamer or another aggressive individual.

Depending on the type of animal and where the bite occurs, the dream might become a metaphor that points the dreamer in the direction of real danger in their lives.

Biting in a dream is a negative omen that indicates an activity that is designed to cause harm to another person who does not desire to be injured.

These forms of aggressiveness are cunningly camouflaged as reactive-inexpressive types (e.g., hostility towards others); proactive-relational aggression (i.e.aggression that might disrupt human connections, for example by stating nasty rumors); or as a direct verbal or physical type that lashed out.

Biting another person in your dreams suggests that you are harboring resentment toward them and want to cause them physical damage.

Receiving dream bites from several animals or reptiles has the psychological effect of making you feel as though you are the target of someone's animosity.

It's conceivable that you don't fully understand the hidden behaviors that these people display; conversely, it's likely that aspects of your personality that you are unaware of unintentionally support the assault.

Alternately, these unprovoked assaults could persist outside their awareness, possibly hidden deep inside their unconscious. The image of a bite will emerge in your dream as a sign of the unconscious traits, tendencies, or habits that are unconsciously attacking you.

People who are unaware of their foolishness carry on living in the dark, repeatedly repeating behaviors that eventually prove to be damaging to them.

We may use a snake bite as an analogy when discussing how mysterious bites are. A snake bite either alludes to an actual danger or connects to the primeval side, including unconscious urges, feminine energy, or an unrecognized shadow.

In addition, the dreamer's sexual orientation is closely correlated with the intricacy of bites. The unconscious male aspect of a woman, or her closest friend or partner, maybe the subject of a woman's dream in which she is being bitten by a dog.

Men who dream about being bitten by dogs usually see it as a sign of their own or someone else's aggressive tendencies, whether they are internal or external. 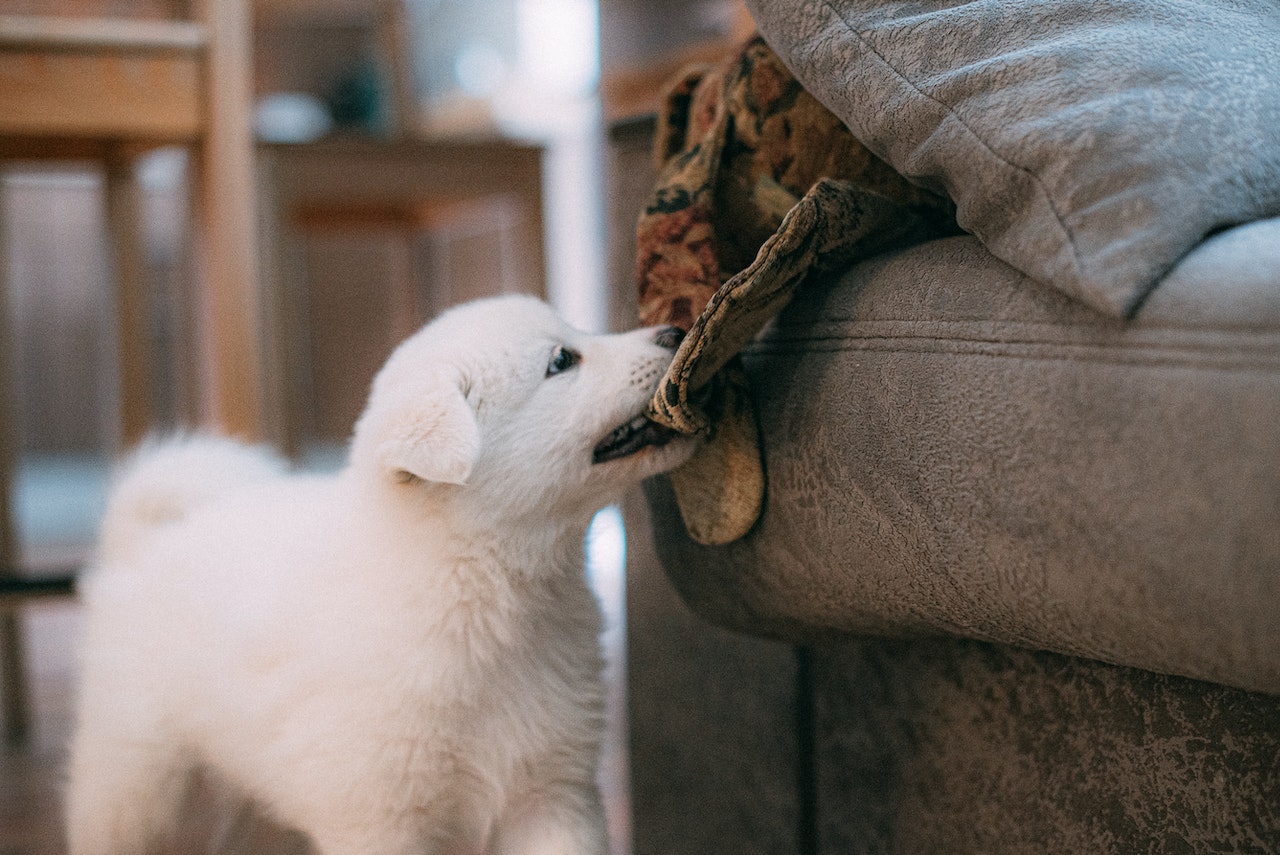 A Puppy Biting a Fabric

What Does It Mean To Dream About Being Bitten By Someone Else?

In many people's nightmares, they witness themselves biting another person who is standing right in front of them.

Both biting another person and being bitten by another person are likely to have unfavorable repercussions; yet, these outcomes might take two quite different shapes depending on the circumstances.

Dreams of this nature frequently depict an individual's addictions, in addition to their yearning for social interaction with other people. On the other hand, the meaning may change depending on who you bit or what was going on at the time you bit them.

This is because the significance is dependent on the context. For example, did it appear as though they were content with the way that things had developed between the two of them?

The second interpretation of this motif's nightmare is that an individual is often afraid on the inside and that this dread is waiting for an opportunity to come out because of self-defense and aggressive behavior.

The Dream Meaning Of Being Bitten By A Unknown Human

If you dream that you are bitten by another person, it is a warning that the person who bites you will cause you physical or emotional pain, as well as financial loss. Because of this individual, you are going to have disappointing feelings.

The dream may represent a handful of your buddies, or maybe just one. Because you trust this person or these individuals, you are going to experience some level of frustration.

If you get bitten in your dream, it is a portent that you will fail to succeed in your professional endeavors. The dream is a metaphor for powerlessness and a lack of success.

If you dream that you are bitten, it indicates that your competitors will try to trap you and that you will go into difficulty as a result of their actions.

The dream may be trying to tell you something about a person in your real life who has a malicious disposition.

The Dream Interpretation Of Being Bitten By A Dog

If you dream that you are bitten by a dog, it is a portent that you will start to lose power and that your commercial endeavors will not be successful. Your rivals will emerge victorious in their competition with you

Alternately, the dream might be interpreted to mean that you will succeed in your endeavors, be the object of jealousy, and fulfill the goals that you have set for yourself. Your competitors will want to catch you in a trap because they will be jealous of your success.

To Dream Of Being Bitten By A Cat

If you dream that you are bitten by a cat, it is an indication that you are experiencing feelings of disappointment. You will experience pain as a result of someone's success and happiness, even though you wish the same for them.

You are constantly there to help out this individual, yet they are unreliable when it comes to their promises to you. This act of treachery will leave you feeling disheartened as well as perplexed.

Having A Dream In Which You Are Bitten By A Spider

A dream in which you are bitten by a spider is commonly seen as a favorable omen. It suggests that you will make the most of an opportunity.

Seeing You Bite An Animal In A Dream

If in your dream you see yourself biting the head off of an animal, this portends a rise in the amount of money you bring in.

If you wake up and find that you have been bitten by an animal, it is a warning that challenging times are ahead for you.

If you dream that you are being bitten by a bird, it is a portent that you will soon be required to make a significant choice that might have a significant impact on your capacity to progress and be successful.

Are you being propped up by the grabbing claws of another person, or are you preventing someone else from reaching their full potential? 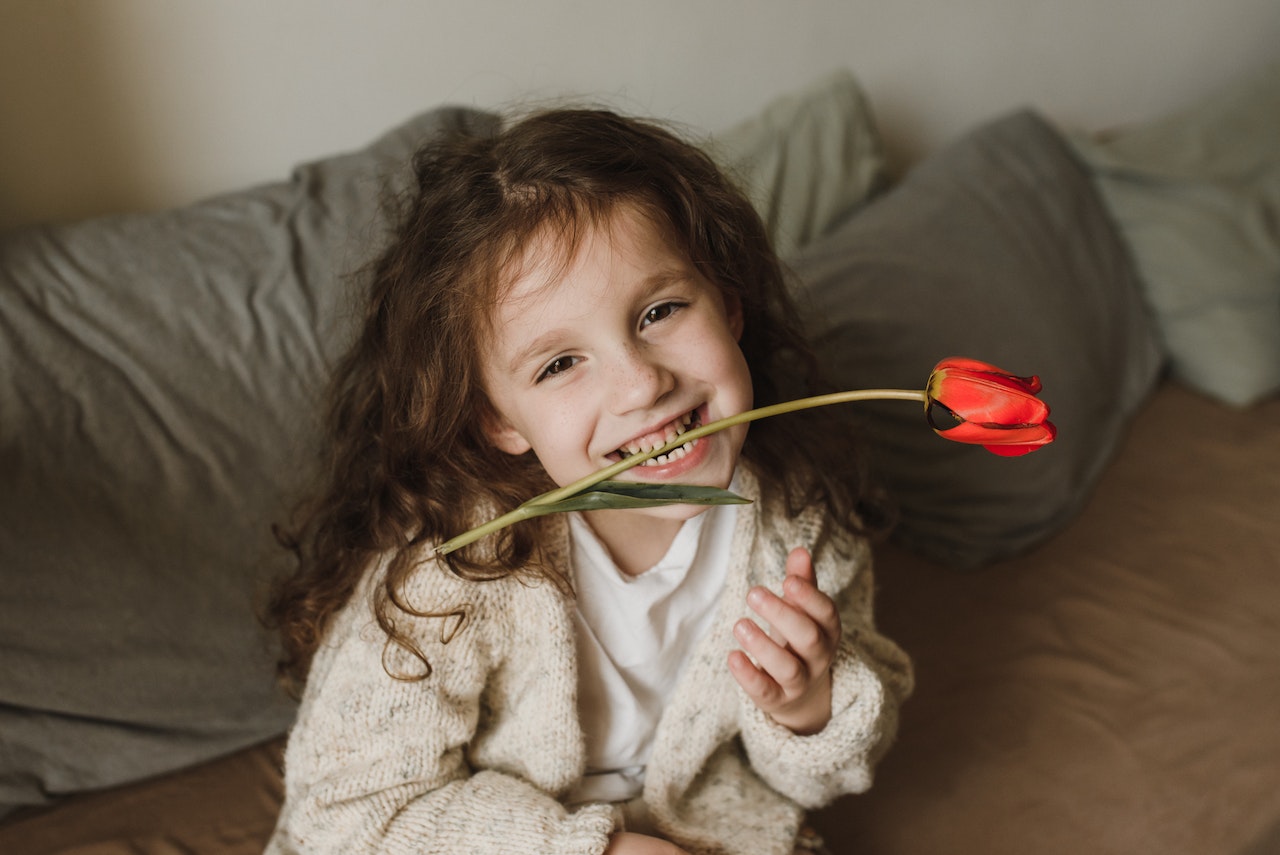 Girl Biting the Stem of a Red Flower

Tiger Bite In A Dream

Your fear about the future is represented in your dreams by tigers biting you, and this dream is a symbolic depiction of that anxiety. Things appear to be spinning out of control, and there is a persistent discomfort that you are unable to escape.

In the animal realm, a tiger's bite is symbolic of the necessity to exercise caution while interacting with those that one does not know.

This could mean talking to yourself about something you said during a fight with a family member that you later came to regret, or it could mean taking a more submissive stance with a coworker.

If you have a dream in which you are bitten by a monkey, it is a portent that your good fortune will be abruptly altered for the worse by events that were unanticipated and uncalled for.

Additionally, it indicates that your adversaries are making plans to harm you in some way. Alternatively, your life is spiraling out of control, and you are unable to stop it.

It is no longer a matter of having fun, and you need to exercise caution so that you do not lose what you now possess. In addition to this, a close friend or member of your family may be misleading you in some way.

Dream Of A Snake Bite

Dreams often feature snakes, which have a significant symbolic meaning because they represent both sensuality and tremendous intelligence.

In addition, they frequently symbolize repressed feelings and experiences that have been buried far below the surface of ourselves.

Because of this, when you dream that snakes bite your hands, it often makes you think about how we're connected to the feelings and memories that go along with these events. 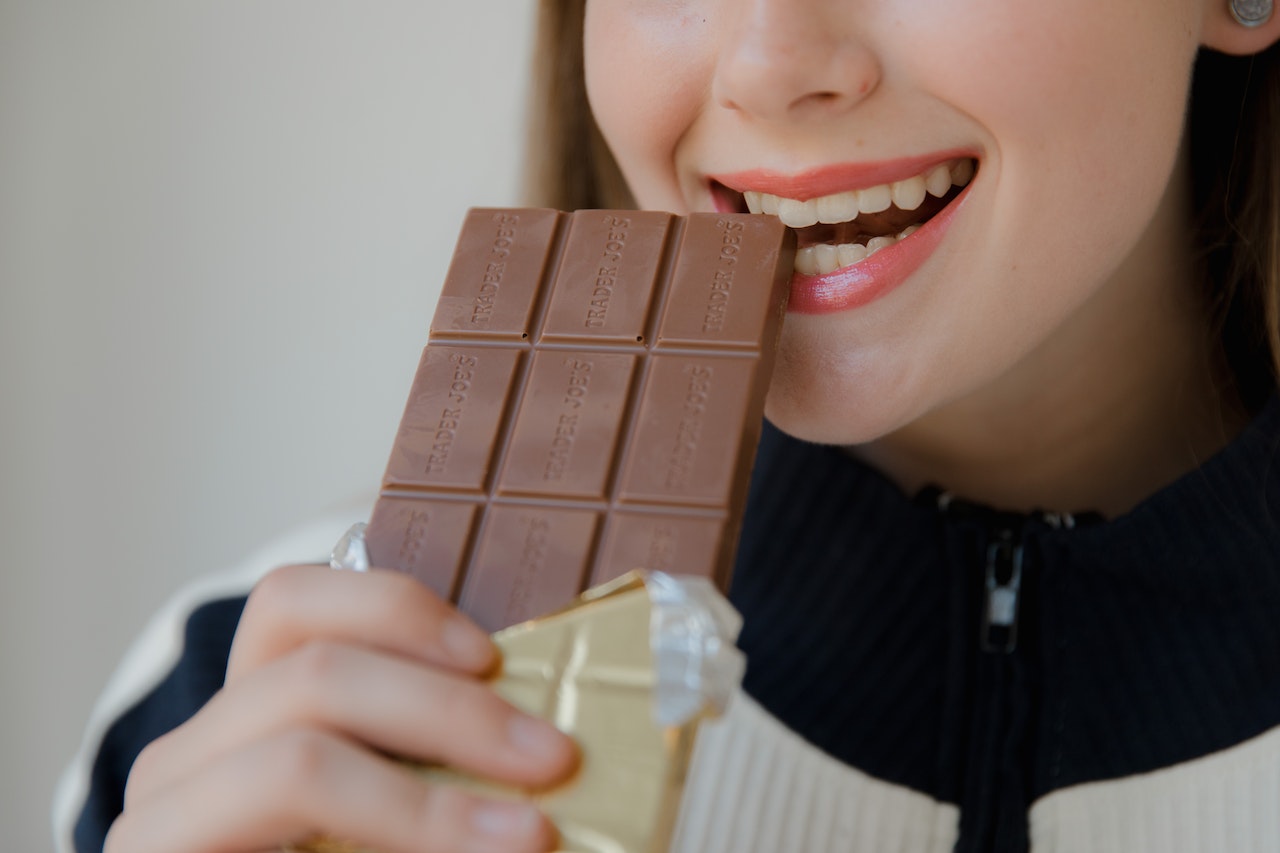 The Dream Of Cats Biting Your Fingers

If you have a dream in which you are being bitten by a cat, it indicates that you have a childlike side that is on the verge of being brought to the surface.

Dreams aren't always random and useless; sometimes they're genuinely trying to communicate something important to you!

In this case, having a dream where a cat bites your hand is your mind's way of telling you that you need to pay more attention to yourself and act like a person your age.

What Does A Dog Biting In A Dream Represent In The Bible?

Dogs are a representation of wickedness and treachery in the Bible. If you see them in your dreams, it can be a sign that a close friend or relative will turn on you.

What Does It Mean If You Get Bitten By An Animal Or An Insect In A Dream?

A bite from an animal or bug in a dream signifies that you are having trouble managing an issue.

What Does It Mean If You Dream That A Vampire Bit You?

A vampire biting you in a dream indicates that your surroundings are exhausting. You are getting physically and mentally exhausted by someone.

A dream bites denotes a potentially damaging influence or issue that may have affected you. Your enjoyment or your good intentions are tainted by anything.

Somebody, some issue, or some unpleasant behavior has gotten to you. How bad or strong this effect or problem was is shown by how bad the bite was.

Being bitten in a dream symbolizes your susceptibility to harmful influences or unhealthy habits. It's possible that you gave in to a vice or temptation. An issue or impediment could also be bothering you.

The dream may be a sign that you've finally crossed the line, or that you've bitten off more than you can chew. Maybe you need to be more careful or responsible.

A little bite could be an indication that someone or something has tried to seduce you or hurt you. Alternately, it can represent a near-call you had as a result of a poor habit.